Raoul Middleman was born in Baltimore in 1935. He has a BA in Philosophy from Johns Hopkins University, and has attended Pennsylvania Academy of Fine Arts, Skowhegan, and The Brooklyn Museum Art School. He has been teaching Painting and Drawing at The Maryland Institute College of Art since 1961. His murals of the different aspects of horseracing, done with his class at The Maryland Institute, are on permanent display at The Pimlico Racetrack in Baltimore. He was President of the National Academy of Design from 1998 to 2001. He has shown his work at The Allan Stone Gallery, The Ice Gallery, MB Modern, and The Kouros Gallery in New York; The Roger Lapelle Gallery in Philadelphia; The Troika Gallery on the Eastern shore; and The C.Grimaldis Gallery in Baltimore.

He has painted landscapes in oils, watercolors and pastels in France, in Brittany and the Ardeche; Germany, in Murnau with its impressive view of the Alps; Italy, with the classical light flowing over the hills of Tuscany and Umbria; the raw fractured shifting skies of Scotland; the canyonlands of southern Utah; the seacoast of Buzzardʼs Bay; and the embankments along the shores of the Susquehanna. The Katzen Gallery of American University has recently featured his paintings of Narratives, Portraits, and Cityscapes, entitled "City Limits". He is married to Ruth Channing, also an artist. 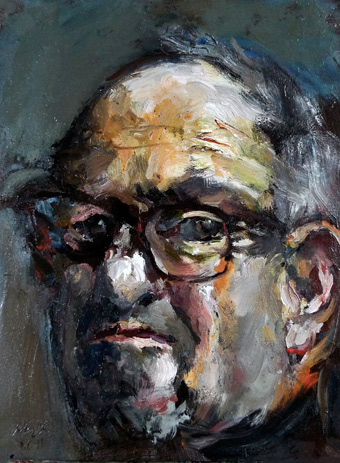